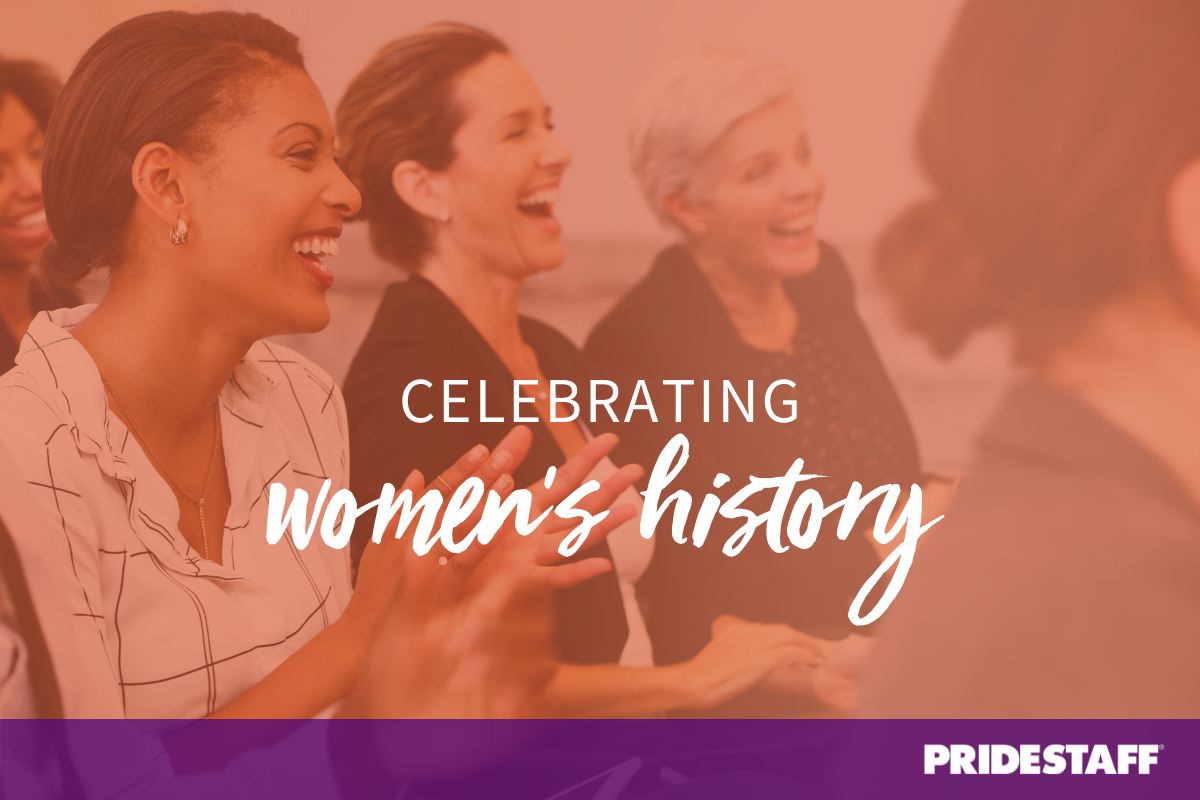 March is Women’s History Month – the perfect time to celebrate women in the workplace and the invaluable contributions they make. It goes without saying that we would be lost without the wonderful women who work in every industry and position imaginable. They quite literally keep things running across a variety of fields, specialties, and organizations.

Think of the women throughout history who have made an impact in the workplace. Florence Nightingale founded modern nursing in mid-1800s England. Anna Bissell became America’s first woman CEO in 1889. Frances Perkins became the first female Secretary of Labor in 1933, helping to create the Social Security program. In 1972, Katharine Graham became head of The Washington Post, making her the first woman CEO of a Fortune 500 company. And in 2021, Kamala Harris became the first female Vice President in American history.

Of course, the history of women in the workplace hasn’t always been positive. And the truth is that we still have a long way to go. The gender pay gap is just one example. The Equal Pay Act was passed back in 1963, but we’re still far from true equality. Click here to enter text. According to Census.gov, data shows that women won’t achieve equal pay to their male counterparts until 2059, if the trend continues at its current pace.

The pay gap is even worse for women of color. Black women working full-time in the U.S. make 62 cents for every dollar paid to white men; Latina women 54 cents; and Native American women 57 cents, according to the National Partnership for Women & Families.

The History of Women in the Workplace

In the early 1900s, most women didn’t work outside of the home. And many who did would leave the labor force when they got married because of cultural normality and legal reasons. However, by 1930 or so, that started to change. Workforce participation rates for women reached nearly 50 percent for single women by 1930, and more married women remained in the workforce, too. Cultural norms were starting to change in this time, in no small part because of the first wave of the women’s rights movement.

Over the next few decades, women’s participation in the workforce continued to rise both for married and unmarried women. By 1970, 50 percent of single women and 40 percent of unmarried women were working. This was thanks to a number of factors: education and graduation rates increased for women, new technology created more clerical jobs which were often filled by women, and cultural mores about women in the workplace were continuing to fade.

Women’s participation in the labor force peaked around 1990, when the rate of working-age women (those between 25 and 54 years of age) topped 74 percent. Unfortunately, it hasn’t increased significantly since then, currently standing around 75 percent.

The Importance of Women in the Workplace

It’s easy to see why women are so important in the workplace: They bring invaluable expertise, insight, and perspective into any team, industry, or organization. But it’s about more than semantics. There is hard data to reference that makes it quite clear: Organizations who make a point of maintaining gender-diverse workforces and leadership teams fare better than those who don’t.

Over the past few years, we’ve seen the call for diverse workplaces reach a fever pitch. And there’s a good reason for that. Multiple studies confirm that organizations with diverse workforces and leadership teams produce better financial results than those with non-diverse teams.

Of course, it’s not just about the money. Other benefits of a gender-diverse and well-balanced workplace include:

COVID’s Impact on Women in the Workplace

The COVID-19 pandemic impacted people of every sort. Unfortunately, it impacted women disproportionately. According to McKinsey’s 2020 Women in the Workplace study, women felt more pressure than men during the height of the pandemic. One in four women considered leaving the workforce entirely or taking a step back in their careers, compared to one out of five men.

Why the disproportionate effect on women? Unfortunately, the answer lies primarily in traditional gender mores. More women than men quit their jobs during the pandemic to stay home and care for their children. And because of the still-wide pay gap, it simply made sense for many heterosexual dual-career partnerships that the mother would leave work while the man stayed on.

One silver lining of the pandemic and the social shifts we’ve seen during the past few years: Women, as well as marginalized groups and people of color, have made gains in representation since the start of COVID-19. The percentage of women in leadership positions is higher than it has ever been. In 2021, the number of women in senior management roles rose to 31 percent across the globe – that’s the highest number ever recorded. And 90 percent of companies worldwide have at least one woman in a senior management role.

The Future of Women in the Workplace

When examined from a bird’s-eye view, the role of women in the workplace has improved drastically since, say, the 1800s. Women in business and government have more representation, power, and pay equity than ever before.

But there are still biases and barriers to women in the workplace that can’t be ignored. Women, and particularly women of color, still have far less opportunities than their male counterparts – and the pandemic didn’t help. So, what does the future of work look like for women in the workplace?

Companies are more committed to diversity, equity, and inclusion (DEI) efforts than ever before, and that must continue before women see the equality that’s necessary. The workplaces of the future need to view women as workers and leaders who are equally valued as anyone else, and to celebrate their contributions and perspectives. Women’s History Month is the perfect time to do that, but it needs to happen all year-round. Then and only then will the longstanding disparities in pay and opportunities be permanently addressed.

Regardless, women have always made significant and permanent positive changes to their workplaces – and that’s not going to change. During Women’s History Month and beyond, PrideStaff salutes the women of the workforce and celebrates their contributions now and in the future.

Make Your Next Hire With PrideStaff

PrideStaff is a leading national employment agency providing temporary, temp-to-hire, and permanent hire staffing solutions to companies of all shapes and sizes. Our staffing firm is committed to finding you the qualified, diverse, and talented candidates you’re looking for.

If you’re ready to hire, contact your local PrideStaff office to learn more about our services and to get started on your talent search.