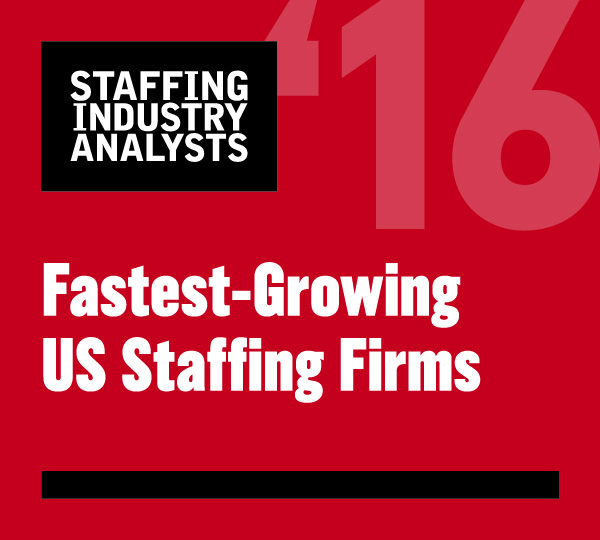 PrideStaff, a national staffing organization, is pleased to announce that they were named one of Staffing Industry Analysts’ 2016 Fastest-Growing U.S. Staffing Firms for the second year in a row.

This year’s list includes 112 firms, up from 102 in 2015. To qualify for the 2016 list, staffing firms had to post at least $1 million in 2011 revenue, and have compound annual revenue growth of at least 15 percent between 2011 and 2015, excluding payrolling revenue and business acquisitions.

“Once again, we are extremely proud to be named one of the fastest-growing U.S. staffing firms by Staffing Industry Analysts,” said PrideStaff Founder and CEO George Rogers. “Making this list two years in a row proves that PrideStaff’s business model, providing the resources of a national organization along with the service you’d expect from a local firm, works. Helping our clients and candidates to thrive truly drives our own success and growth.”

In addition to this latest honor, PrideStaff also distinguished itself earlier this year by being named one of Staffing Industry Analysts’ 2016 Largest Staffing Firms in the United States for the fourth consecutive year. PrideStaff is part of the elite group of 134 firms that each generated over $100 million in U.S. staffing revenue in 2015, the criterion for making the 2016 Largest Staffing Firms list.

The success of PrideStaff’s approach is evident, as they consistently rank among the highest 1% of staffing firms in the industry. According to Inavero, a business intelligence firm specializing in the staffing industry, PrideStaff earned a client Net Promoter® Score (NPS) higher than other well-known brands such as Southwest Airlines and Netflix. NPS is computed by subtracting a firm’s detractors from its promoters.

PrideStaff was founded in the 1970s as 100 percent company-owned units and began staffing franchising in 1995. They operate over 74 offices in North America to serve over 5,000 clients. With over 40 years in the staffing business, headquartered in Fresno, CA, PrideStaff offers the resources and expertise of a national firm with the spirit, dedication and personal service of smaller, entrepreneurial firms. PrideStaff is the only commercial staffing firm in the U.S. with over $100 million in annual revenue to earn Inavero’s prestigious Best of Staffing Diamond Award for three years in a row, highlighting exceptional client and talent service quality.